Farmers in England are paid via the Environmental Stewardship Scheme to keep their land in good agricultural and environmental condition. This scheme is smaller than the better-known CAP payments, but still accounts for around £3 billion of public funding over the past decade, which isn’t exactly small potatoes (sorry).

I recently discovered there’s open data about the land in England that’s funded in this way. With Brexit hurtling unstoppably towards us, and no-one sure what’s going to happen to farm funding, it seems like a good time to map it.

Talking to farmers about Environmental Stewardship, it seems broadly positive: it encourages good land management, and provides life support for many small farms. But on the other hand, it’s complex, it subsidises golf courses and grouse moors, and it’s weighted towards bigger landowners. So the current uncertainty could provide an opportunity to simplify and rebalance.

Here, I write about what’s in the data: if you just want to see the map of all payments, go to farmpayments.anna.ps. You can search by payee name, and see the payments near you. 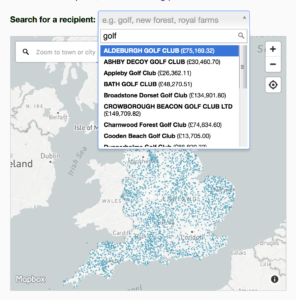 The ES scheme pays farmers to keep their land in good environmental condition, and make it attractive for wildlife. For example, they might leave a strip at the edge of a field unplanted, so that animals and birds can live there, or they might maintain traditional hedges or preserve historic features.

The payments are awarded for entry level, higher level, or organic stewardship. Payments are generally awarded over 5 or 10 years, and the total sum in the dataset (which I think is all current agreements) is £2.64 billion. This compares with annual CAP payments of about £3 billion.

There are just over 26,000 unique ES payments active, to around 20,000 payees. The names in the dataset are the managers of the land, not the owners (otherwise I’d be writing about this over at Who Owns England). Sometimes the managers are individuals, sometimes companies, sometimes LLPs and trusts.

(The Gini coefficient – the standard measure of inequality – for the land size of the holdings is 0.62, and for payments is higher at 0.71, which again suggests that the schemes are easier to access for bigger payees.)

The total area of farmland covered by current agreements is just under 3.8 million hectares. The total farmed area of England is about 9 million hectares, so wherever you are in the English countryside, you’re probably looking at land that’s been physically shaped by this scheme.

Here are the top 15 payees overall. The top payees are wildlife and heritage trusts, and then some big farming groups, generally in the east of the country:

Some of these “commoners” committees are actually groups of sheep farmers.

You’ll notice the Lilburn Estates entry at number 10, with £4.7 million of grants – that’s a huge grouse moor in Northumberland. The Guardian recently covered a Friends of the Earth investigation suggesting that grouse moor management was anything but environmental, with large-scale heather burning.

As well as these subsidies, the estate receives more than £1 million per year from CAP. It’s owned by Duncan Davidson, founder of mega-housebuilder Persimmon Homes. Here’s the extent of the estate: 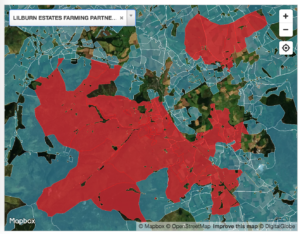 As well as grouse moors like the above, there’s at least £3.2 million going to golf clubs around the country, though many would regard the mere existence of golf clubs as environmentally problematic. For example, Sunningdale Golf Club, near Virginia Water, has been granted £348,839 for “higher level stewardship”: 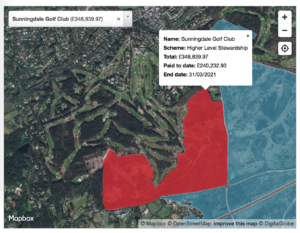 There are some surprising grantees, who might well be doing environmental work, but who could probably afford to do it without public money. Eton, Winchester, Millfield, and Wellington schools all receive funding, as do Jesus, Caius, and Pembroke at Cambridge. The University of Oxford Botanic Garden gets £55k, and Christ Church Meadows in Oxford receives £33k:

There’s also money going to some of the wealthiest landowners around. You can see by searching the payees list that the City of London Corporation gets over £2 million for large areas outside London, the Duchy of Cornwall gets £68k directly and another £136k for the Duchy Home Farm, and the Royal Farms at Windsor receive over £1 million for ‘organic stewardship’: 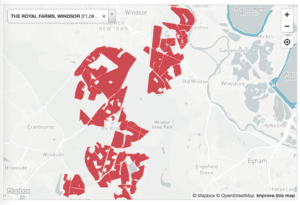 Some of the land for which grants are awarded is held offshore – nothing illegal about that, but we might ask whether we want to subsidise property owned in tax havens. The commercial pheasant shoot at the Downton Estate, west of Ludlow, has been granted £800k. The land on which it runs was bought by an Isle of Man company in 2010, as you can see on the Private Eye map of overseas land ownership that I built.

Sometimes, grants go to landowners who are both extraordinarily wealthy, and use offshore vehicles. The Marquess of Cholmondeley has a net worth of £60m, according to the Sunday Times Rich List. His estate at Harpley in Norfolk is owned in Jersey, and receives £400k per year from CAP, and £500k total from ES.

Or take the Culham Court Estate outside Henley, bought for £32 million in 2006 by Swiss billionaire Urs Schwarzenbach. (Schwarzenbach is the delightful chap who sacked his gardener for getting injured.) The land receives £120k per year from CAP and £250k total for ES: the Eye’s map shows that the land is owned by a British Virgin Islands company.

While some of the above might seem absurd, incentivising environmental management of land is obviously sensible. And there’s no doubt that the ES scheme supports many small family farms.

But many bigger landowners could be asked to carry out environmental work without subsidy. It also seems clear that the schemes are easier for ‘big farmer’ to access, while small farms have it tough. (There’s a great discussion of the context in this London Review of Books article.)

So whether our post-Brexit priorities are to support family farms, produce cheap food, protect heritage, or encourage diverse wildlife, we need to discuss how we fund the countryside. Many post-Brexit discussions would benefit from a bit of data: I hope the payments map will help people working on this problem.

Thanks to Will Perrin, Seb Bacon, Guy Shrubsole, and Charlie Fisher for comments on the first draft of this post.

Introducing… What Size Am I