Land ownership in Britain is secretive, and always has been. About 18% of land in England and Wales is unregistered, and not even the government knows who owns it. Even information about registered land is not freely available – you have to pay Land Registry £3 to find out who holds any piece of land.

But not many people know that you can use Land Registry data to explore land ownership near you, easily and for free. You can’t see who owns what without paying, but you can see the shape of the land that is registered.

Here’s how the data looks for central Oxford. You can see clusters of small plots for houses, much larger areas owned by a single landowner, and big swathes of unregistered land: 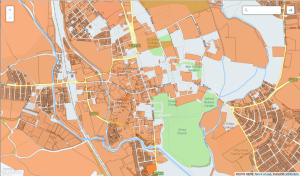 You can see the plots for individual houses, which is super useful for house-hunting: 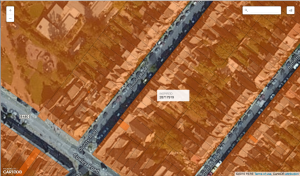 The data you can use to do this is called the INSPIRE Index Polygons. I used it to build the Private Eye map of offshore property ownership.

However, the INSPIRE Polygons come with draconian licensing conditions, imposed not by Land Registry but by Ordnance Survey, the great vampire squid wrapped around the face of UK public-interest technology. So you can’t usually share or republish them without paying huge fees.

As a consequence, no-one has created a convenient way to look at them, and most non-nerds don’t know this data exists. (Well, in theory, there’s some kind of online map viewer on data.gov.uk, which kinda sorta works if you check the checkbox and zoom down to a few streets… but it’s pretty limited.)

So the rest of this post is about how you can legally use this INSPIRE data yourself to explore land ownership near you. No programming knowledge needed.

1. The easier way: use QGIS

This is probably the best approach if the words “edit your PATH variable” don’t fill you with excited anticipation.

First, install QGIS, which is a free GIS desktop tool. Then go to the INSPIRE download page and choose the council you care about. Download the zip file and unzip it.

Open QGIS. Go to Layer > Add Layer > Add Vector Layer. Use “Browse” to find the GML file that you just unzipped, and add it. It may take a little time to import. When it’s imported, you should see something like this: 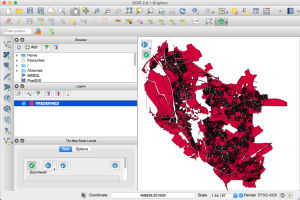 Now you want a background map. Go to Plugins > “Manage and Install Plugins”, and search for “Tile Map Scale Plugin”, then install it. Once you’ve installed that, you should see a new panel in the bottom left of the screen. Click on the middle button and add “osm_landscape.xml”. This will hide your INSPIRE layer. In the “Layers” panel, use the mouse to reorder the layers, so the INSPIRE layer is on top: 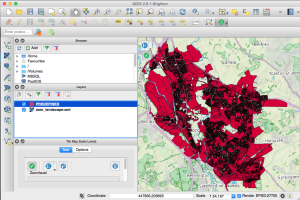 Bam! Let’s format the INSPIRE layer to make it more useful. Right-click on the “PREDEFINED” layer and open Properties. Drag the transparency slider to about 50%, so you can see the map below each polygon. Click on “simple fill” and adjust the border width to set a thicker border around each polygon. This makes it easier to see individual plots: 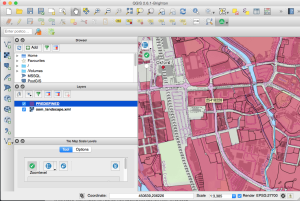 And finally let’s show INSPIRE IDs on hover. Back in Properties, click on “Display” and then under “field” choose INSPIREID. Then, from the View menu, make sure “Map Tips” is selected. Now when you hover, you should see the INSPIRE ID of each polygon pop up.

This is useful because if there’s a particular piece of land that interests you, you can search Land Registry by INSPIRE ID and pay your £3 to find out who owns it.

2. The slightly harder way: use CartoDB

CartoDB is basically a geographic database in the cloud. It’s amazing, and easier to use than QGIS, but you’ll have to do some work to get the data into shape first.

Test the above worked by typing ogr2ogr in a terminal.

Now change to the directory where the GML file is, and use ogr2ogr to transform the data:

(UPDATE: If your final inspire.geojson file is more than 250MB, it’ll be too big for CartoDB’s free tier, and you’ll need to use QGIS instead. Thanks Matthew for reporting that!)

The hard bit is over. Make a free account on CartoDB, then add a new dataset, and upload your new inspire.geojson file: 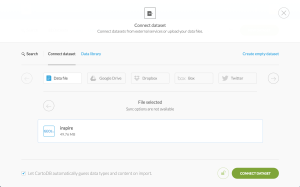 Again, this may take a while. Once it’s imported, click on “Map View” to see your map: 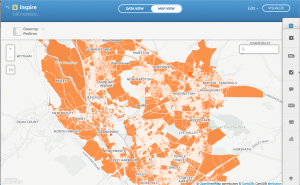 Wham! Click on “infowindow” in the right-hand menu to show the INSPIRE ID on click or hover, and on “wizards” to change the transparency.

In theory, you could now click “Publish” and create a link to this map to share with family, friends and neighbours. However, under OS’s aggressive INSPIRE terms, you can’t freely use the data for anything except personal non-commercial use, and you mustn’t make the data available to third parties. So that would be highly risky – definitely don’t do that!

A word on open data

The government recently announced a consultation on the privatisation of Land Registry. Leaving aside whether or not this is generally a good deal for the taxpayer, it would remove Land Registry outside the reach of Freedom of Information.

Land ownership in England & Wales is already incredibly opaque. The government only released this INSPIRE data because of a European directive, which it tried to oppose. Does anyone seriously imagine that transparency over land in Britain will increase after privatisation? No? Thought not. So head over now and respond to the consultation.

UPDATE: David Read points out that the dataset is specifically called the “INSPIRE Index Polygons”. Updated, thanks David!